The FBI book reports on Marcuse

As part of our research into the history of the UCSD Philosophy Department, we requested and obtained, from the FBI and DOJ, the Freedom of Information Act file on Dr. Herbert Marcuse. We received in the mail a disc containing a 607 page pdf file; all of which were documents concerning Marcuse. A large portion of the file is in regard to the death threat that Marcuse received July 1, 1968 (more info here). The rest of the file is information regarding the tracking of and following Marcuse for several decades, from the 1940s until the 1970s.

Much of the file is in regard to surveillance of Marcuse's movements around the world, categorized under sub subjects as: "Anarchy", or "New Left Matter". The FBI received many complaints from San Diego citizens who felt that Marcuse was dangerous to society and should not be in a position to influence others. The FBI even received tips from Marcuse's La Jolla neighbors on his whereabouts and travel plans/patterns.

The FBI actually commissioned book reports to be done on several of Marcuse's published works. Below are the actual reports for "Reason and Revolution", "One Dimensional Man", and "Essay on Liberation" from Marcuse's file.

There are many pages omitted in the Freedom of Information act file on Marcuse, that is, there are several documents not released to the public. Names of sources and many other people are also blacked out of the documents. This leaves the door open to many questions about who exactly was communicating with the FBI about Marcuse and what exactly is too sensitive to be released to the public. Another interesting note is that the file grew nearly forty pages from the day we first requested it to the day we actually received it; leading us to believe that the file on Marcuse, even now in 2010, is still growing.

Posted by Lance Winsaft at 8:38 PM No comments:

In the upcoming months, I will be featuring works published by philosophers while they were or are professors at UCSD, beginning with a major new scholarly resource produced by Eric Watkins: Kant's Critique of Pure Reason: Background Source Material (Cambridge, 2009). The front matter and some other material is available at the official page at Cambridge University Press. The work has also been recently reviewed at Notre Dame Philosophical Reviews. Below is the blurb and a short bio from the CUP page.

This volume offers English translations of texts that form the essential background to Kant’s Critique of Pure Reason. Presenting the projects ofKant’s predecessors and contemporaries in eighteenth-century Germany, it enables readers to understand the positions that Kant might have identified with “pure reason,” the criticisms of pure reason that had been developed prior to Kant’s, and alternative attempts at synthesizing empiricist elements within a rationalist framework. The volume contains chapters on Christian Wolff, Martin Knutzen, Alexander Baumgarten, Christian Crusius, Leonhard Euler, Johann Lambert, Marcus Herz, Johann Eberhard, and Johann Tetens. Each chapter includes a brief introduction that provides succinct biographical and bibliographical information on these authors, a concise account of their projects, and information on the importance of these projects to Kant’s first Critique. Extensive references to the firstCritique, brought together in a concordance, highlight the potential relevance of each text.
Eric Watkins is Professor of Philosophy at the University of California, San Diego. The recipient of grants from the Fulbright Foundation, the National Endowment for the Humanities, the National Science Foundation, the Max Planck Institute for the History of Science, and the Alexander von Humboldt Foundation, he is the author of Kant and the Metaphysics of Causality, which won the Book Prize in 2005 from the Journal of the History of Philosophy.
Posted by Monte Johnson at 1:15 PM No comments:

Pat and Paul Churchland have officially retired from the philosophy department at UCSD, but Pat has assured me that they will continue to "haunt us" (her words). Eliminative materialist ghosts are the best kind.

If you haven't already seen it, be sure to read the 2007 New Yorker feature on the Churchlands (full text available here; abstract below) entitled "Two Heads". The article explains how the two are able to maintain psychic unity even at a distance-- it's a bit mysterious, but there is some perfectly reasonable materialist explanation, I can assure you.

On page 59 of the magazine is a fine picture of them together, hydra-like, taken by Steven Pyke and included in his series of portraits of famous philosophers, entitled Philosophers II (Pyke also took a portrait of Richard Arneson, which I mentioned in an earlier post). Pyke also took these beautiful portraits of their individuated avatars.

ABSTRACT: PROFILES of Paul and Patricia Churchland. Paul and Patricia Churchland are in their early sixties and are both professors of philosophy at the University of California at San Diego (U.C.S.D.). They have been talking about philosophy together since they met; they test ideas on each other and criticize each other’s work. Some of their ideas are quite radical. The guiding obsession of their lives is the mind-body problem, or how to understand the relationship between conscious experience and the brain. In the past, everyone was a dualist. Nowadays, few people doubt that the mind somehow is the brain. Paul and Pat Churchland believe that the mind-body problem will be solved not by philosophers but by neuroscientists. Describes Pat’s childhood and background; she attended the University of Pittsburgh, where she met Paul, and Oxford. Describes Paul’s background; as a child he was influenced by the science fiction novels of Robert Heinlein. Mentions Wilfrid Sellars. Describes their jobs as professors at the University of Manitoba in the early 1970s. Mentions Pat’s study of the “split brain.” Mentions Thomas Nagel’s “What Is It Like to Be a Bat?” Pat disagreed with Nagel’s assertion that science could never understand consciousness. She also objected to the prevelant notion that neuroscience would never be relevant to philosophical concerns. In the early 1990s, Australian philosopher David Chalmers developed a theory of consciousness as a universal primitive, like mass or space. Mentions Francis Crick and the neuroscientist V. S. Ramachandran. These days, many philosophers give Pat credit for making the link between the mind-body problem and the brain. Pat and Paul are currently studying the implications of neuroscience for ethics and the law. Much of Paul’s work is focused far into the future. Both he and Pat like to speculate about a day when whole chunks of English are replaced by scientific words. As people learn to speak differently, they’ll learn to experience and think differently. Paul believes that someday language will disappear altogether and people will communicate by thought. If so, a philosopher might come to know what it’s like to be a bat.

Our very own Richard Arneson has been photographed by Steve Pyke for inclusion in his collection of portraits of famous philosophers, entitled Philosophers II. The photos are accompanied by short quotations from the philosophers.

"At UC Berkeley in 1967, when I started graduate school in philosophy, you could hardly avoid the question: What conception of social justice makes most sense? I have always resisted answers that suppose a society could be just and fair independently of whether or not its members are leading genuinely good lives."
Posted by Monte Johnson at 1:26 PM No comments:

The Death Threat against Marcuse in 1968

Shortly after Dr. Herbert Marcuse received a death threat at his home in La Jolla on July 1, 1968, the FBI, US Postal Service, and the media descended on San Diego. Below is a Xerox copy of the actual note (contained in the FBI file on Marcuse, obtained through a Freedom of Information Act Request). 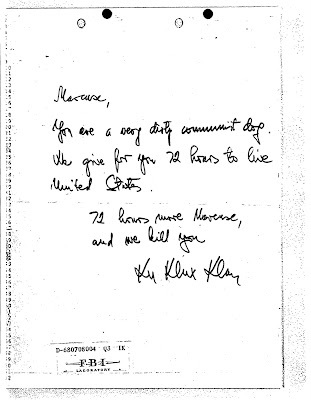 According to a July 1, 1968 article in the Los Angeles Times entitled "'New Left' UC Professor Flees Home After Death Threat", Marcuse first took the letter as a prank and was inclined to ignore it, until July 3 when his telephone service was disconnected by an anonymous call. Marcuse, alarmed by the phone service incident, decided to leave his home with his wife on July 4.

The intrepid Marcuse was not, however, to be permanently ousted from San Diego. A Los Angeles Times article entitled "New Left Teacher Declares He Won't Quit Despite Death Note", published July 12, 1968, describes Marcuse's intentions after the threat: mainly, that he will return to teach in the fall. The same article also gives an account of UCSD philosophy chair Jason Saunders telling reporters that Marcuse had said, "I will not run away. I will not be intimidated".
Shortly after the death threat, Revelle College administrators and faculty expressed overwhelming support for Marcuse. About a month later in an Aug. 11, 1968 Los Angeles Times article, entitled "UC San Diego Faculty Backs Dr. Marcuse", gives a detailed account of this support. The Academic Senate of UC San Diego endorsed a statement to Chancellor McGill which read:

"Prof. Marcuse is a distinguished political philosopher, whose proactive writings have stirred controversy all over the world. We know him as a man of integrity and as an outstanding teacher. We wish to assure him and our chancellor of our complete support against the attempt to silence him, whether they be well-intentioned citizens, by persons capitalizing on false rumors to agitate public sentiment or by making threats against his person. The reputation of the University of California and of the San Diego community are at stake. We are confident that a great majority of the public supports us in our determination to develop in San Diego an outstanding university, free of violence or threats of violence and dedicated to the principles of freedom of expression and of scholarship, without which a democratic society cannot long survive."

Marcuse did indeed return in September to teach and continued to receive outspoken support from the UCSD Faculty and Staff. He taught at the University for several years after this incident and maintained an office on Revelle campus as "professor honorar", working with graduate students at the University until his death in 1979.

Craig Callender in Scientific American and on TV

We here at UCSD Philosophy are all very proud of our colleague Craig Callender's recent article in Scientific American (June 2010): "Is Time an Illusion?" You can get a preview of the article online. Unfortunately, it turns out that time is real, although it is something of a consolation to hear that it is not fundamental.

Craig is also shown on "Philosophy TV" debating Johnathan Schaffer on various topics of metaphysics (or, er, meta-metaphysics-- can't we just get back to physics?)-- check out the streaming online video.

Great job Craig! You've got a face made for internet television blogs.
Posted by Monte Johnson at 8:09 PM No comments: